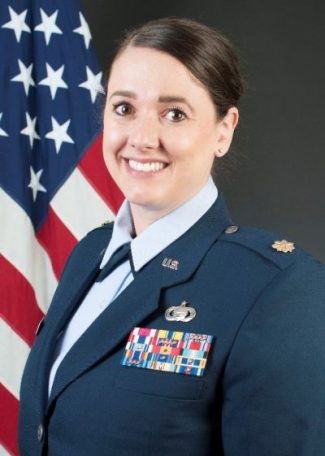 Heroes In Transition (HIT) is inviting the public to its 11th Annual Fall Gala on Friday, November 6 at 7 pm. The theme of this year’s gala, which is being held virtually, is “Improvise, Adapt and Overcome.”

“The theme is emblematic of what we’ve all had to do this year as a society, but what our active duty military, veterans, and military families consistently have to do in service to our country,” HIT Executive Director Nicole Spencer said. “We’ve long recognized the resiliency of those who serve and have served our country. This year, Heroes In Transition has had to embrace that same type of resiliency as an organization to ensure that those we serve receive the support they need and deserve during these uncertain times.”

Among those who will highlight the importance of Heroes In Transition’s work is Air Force Major Sara E. LaFranchise, who is serving as the gala’s keynote speaker.

LaFranchise enlisted in the Massachusetts Air National Guard in 1997 and has served in numerous positions supporting multiple operations, including Iraqi Freedom, Noble Eagle, New Dawn, and Enduring Freedom. She currently serves as a Flight Commander for the 102nd Intelligence, Surveillance, and Reconnaissance Group at Otis Air National Guard Base.

Sara and her husband Eric, who serves in the Air National Guard, were introduced to Heroes In Transition through a fishing trip they went on last summer with their children. Since then, they have attended a number of Heroes’ events, including its Families In Transition (FIT) Week at Alliance Equestrian Center at Camp Lyndon in Sandwich, which gives military families a chance to bond with and ride horses over the course of five days as well as its Fall Couples Retreat in October 2019.

Along with her keynote speech, the Fall Gala will highlight the work Heroes has done this year in spite of the pandemic. This includes holding multiple virtual events to support veterans, military families, military couples, and military spouses in the spring.

This summer, Heroes started holding in-person events with strict health and safety protocols in place. The outings, which have been held outdoors, have included fishing trips onboard Patriot Party Boats; kayak and Stand Up Paddleboard (SUP) excursions through RideAway Adventures; a hike at Grace Trail in Plymouth; and apple picking at C.N. Smith Farm in East Bridgewater.

This past weekend, Heroes held a two-day equine therapy program for six veterans at Alliance Equestrian Center at Camp Lyndon in Sandwich.

“By attending or donating to this year’s Fall Gala, people make programs like this possible,” Spencer said. “These programs give those we serve a chance to heal, build confidence and resilience, and connect with others who understand the challenges of military life.”

To purchase tickets or donate to the gala, click this link.