Col. Doonan, the Gala’s Featured Speaker, is Right at Home in Falmouth 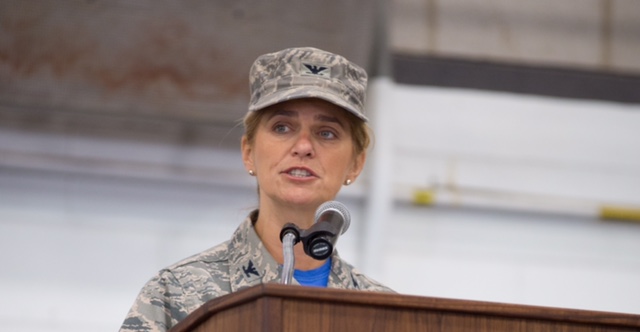 When Col. Virginia Doonan rises to address guests at the 7th Annual Fall Gala of Heroes In Transition, she’s likely to see more than a few familiar faces.

Col. Doonan, commander of the 102nd Intelligence Wing, Otis Air National Guard Base, has been a resident of Falmouth since arriving on Cape Cod in 1989.

“I’ve lived here longer than anywhere else,” she says. “I raised my kids here; it’s where all of my friends are.”

In June, Col. Doonan took over the leadership of the 102nd Intelligence Wing, Otis Air National Guard Base, becoming the first female commander in the wing’s 74-year history, dating back to its origin as the 318th Fighter Group in 1942. She will be the featured speaker at the Gala this Saturday, October 22, at the Coonamessett Inn in Falmouth.

During her career, Col. Doonan has served in Operations Northern Watch, Noble Eagle, Iraqi Freedom, and Enduring Freedom, in Afghanistan.

Having been a part of life in Falmouth for so long, Col. Doonan says, not only helps her understand how important it is to have the support of the community but also puts her in a position to foster that support by being active in local affairs, available to answer questions and discuss issues regarding the base.

Among other local involvement, Col. Doonan is on the board of directors of the American Red Cross for the Cape and Islands, and of the Cape Cod Community College Center for Graduate Education. She has also volunteered in the Falmouth schools: her 17-year-old daughter, Colleen, is a senior at Falmouth High School, and a son, Peter, is a freshman.

Among the topics of Col. Doonan’s remarks will be how operations of the intelligence wing at Otis can put a strain on service men and women. On the one hand, most no longer face deployment; on the other, returning home after every shift, being unable to share the stress of dealing with classified and top-secret activity, can bring its own drawbacks.

To help, Heroes In Transition has provided the 102nd Intelligence Wing with both a “reset room” to allow service men and women to de-stress before heading home each day, and an assistance dog, Zoe, to help foster communication. Zoe will be introduced at the Gala.

“Having your support means a lot,” said Col. Doonan.

Asked to name her favorite things about living in Falmouth, Col. Doonan—who grew up in Houston, TX— said: “That’s easy: the beaches. It’s one of the most beautiful places in the world, and I’ve traveled all over. The schools are first-rate; the quality of life is great.”