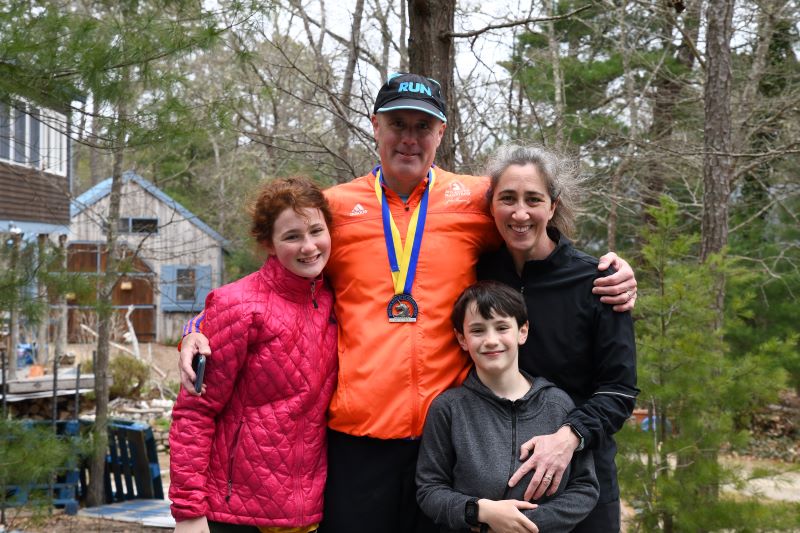 Prior to today Matt Auger had run 20 marathons. But it is his 21st that may be his most memorable.

“I think this has to be among the top,” he said this morning with just four miles to go before he completed the magic number, 26.2 miles, that represents the pinnacle of long distance running.

In a perfect world, Auger would have finished his seventh straight Boston Marathon alongside race director Dave McGillivray. The pair have done so as part of a marathon ritual; they start the famed course once McGillivray’s race duties are over and are the last ones to cross the finish line.

The two have formed a close bond thanks to the Falmouth Road Race which McGillvray’s company, DMSE Sports, manages. Auger has been with the road race since 1990 and currently serves as its operations manager.

Because of the pandemic, Auger and McGillivray had to improvise. Auger ran a 3.5-mile loop from his Mashpee home to Roche Bros. in South Cape Village while McGillivray had to create a similar course around his North Andover neighborhood.

“It makes me feel great I’m connected to somebody who has dedicated his life to running and to making running better for everybody else,” Auger said. “I’d love to think there are hundreds if not thousands more who said, ‘Today, I’m going to do that thing I trained all those months to do because I don’t need the people. I don’t need anything except that challenge of me putting my foot in front of the other foot for 26 miles.’” 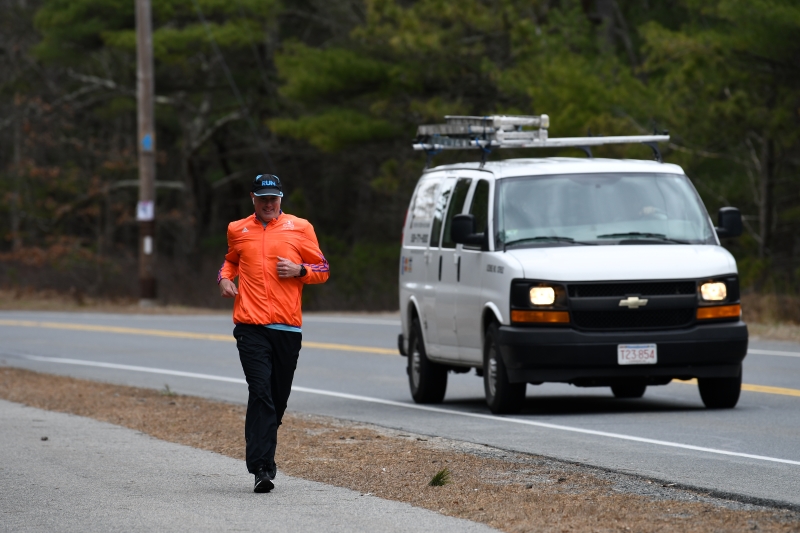 These personal challenges are nothing new to Auger, who served in the Army for six years. He has maintained his connection to the military through his support of Heroes In Transition. In recent years, he has volunteered as the course manager for the Ruck4HIT.

Auger was first introduced to Heroes through our Executive Director Nicole Spencer who had once served as the volunteer coordinator for the Falmouth Road Race. “I knew if she was involved with Heroes In Transition, it must be an amazing organization,” he said. “I don’t think I’ve ever met a more tireless, optimistic person in both Nicole and Steve [Spencer] and that affects you.

“When you learn the ultimate goal of Heroes is to help others, it is the exact idea that if you teach a man to fish, he’ll have fish the rest of his life,” Auger continued. “Heroes doesn’t just give you the fish, they are all about helping you through whatever challenges you have by accessing the tools and resources to do it.”

There may be no bigger challenge that we are all facing than the current pandemic. Financially, physically, emotionally, and mentally these are difficult times. The postponement of the Boston Marathon — the first in its 124-year history — is just one example of how life has changed.

Auger could have chosen not to run today. But he got out of bed, laced up his sneakers and set out at 7 am to run a marathon. Adding to the experience is the fact he ran parts of it with his family – his 12-year-old daughter McKay ran 3.5 miles; his nine-year-old son Grey ran 7 miles; and his wife Eilis ran 3.5, including the last two to the finish line.

His finish time, 4:35, didn’t break records, but what was remarkable is that despite of everything going on, he ran a marathon on Patriots’ Day, even if it wasn’t in Boston.

“At the end of the day, when you run a marathon, it is really between you and yourself,” he said. “I’d like to think that I’m giving something back by honoring the day and challenging myself to meet the challenge that the Boston Marathon gives to so many thousands of people.” 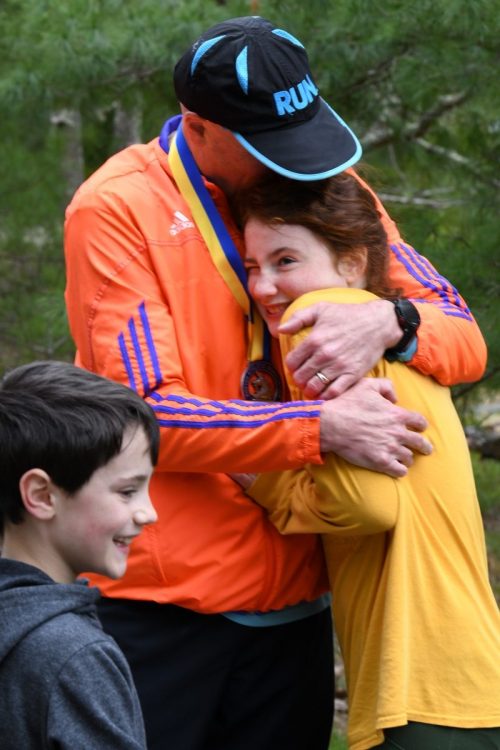