Among those who competed in this past weekend’s Not Your Ordinary Ruck4HIT Challenge was Brad Mantel.

The captain of Rye Ruckers, it was his first time participating in the Ruck4HIT though he is quite familiar with Heroes, having attended our Fall Gala and run the Falmouth Road Race multiple years to support our work.

A native of Rye, New York, Mantel’s connection to Heroes dates back much further. “Cyndy and Ken live across from my parents in Mashpee. That’s how I know them,” he said. “I’ve come up here every summer for my whole life basically.”

It was during those trips to Cape Cod that Mantel became close with Cyndy Jones and her late husband Ken and got to know their only son Eric. “Honestly, he was a real social and really funny guy,” Mantel recalled of Eric. “I knew him when he was still at Northeastern before he went to flight school. I didn’t know him super well, but we crossed paths a handful of times and would go get a beer or whatever when we were here.”

As for the work Cyndy and Ken have done with Heroes following Eric’s death in Afghanistan in October 2009, Brad said, “it is remarkable… I feel terrible the hand they were dealt with Eric, but they have turned a negative into a real positive in both raising money and awareness for Heroes In Transition.” 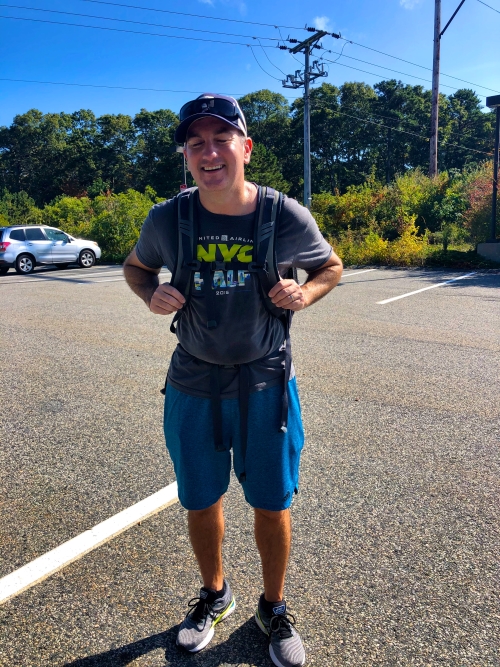 His admiration for this work is one of the reasons Mantel has been a longtime supporter of Heroes In Transition. As the son of a Navy veteran, he also understands the sacrifices those in the military make and the need to give back to them. For these reasons, Mantel jumped at the chance to participate in this weekend’s challenge, running 18 miles and bicycling another 23; his team, which consisted of several friends in Rye, logged a total of 264 miles.

It was the team’s first time participating in the Ruck4HIT. Mantel said it won’t be their last.

“I think anytime you do a race, it’s a good idea to correlate them to a cause,” he said. “Heroes In Transition is the cause I have historically done them for over the years… I think it’s a great organization and I like giving back to military families. I’ve seen Cyndy work tremendously hard at it so it’s kind of a no-brainer for me that of all the organizations I was going to give back to, this was going to be the one.”