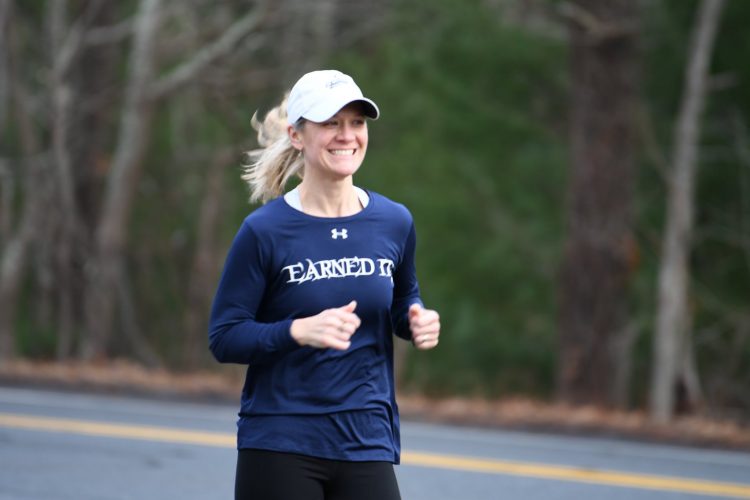 When Nicole Spencer finds herself running, her thoughts go to veterans like her brother Adam, who served four years in the Marines that included a deployment to Iraq in 2009. That was the year Nicole started training for her first marathon.

“The whole reason I got into running long distances was because I thought, ‘If Adam was in Iraq doing what he was doing, I could run a marathon,’” Nicole recalled.

Fast forward nearly 12 years later and our Executive Director continues to run and run and run some more. Like the Energizer bunny, she doesn’t stop – she’s not only organized our past five Ruck4HITs, she has run in each one, wearing a 20-pound rucksack in tribute to veterans and service members who can’t.

Last spring, she ran 20 miles per day over the course of three days, the same weekend our Ruck4HIT was supposed to be held until the pandemic had other plans.

This weekend, she’ll add to her growing list of athletic accomplishments when she runs 4 miles every 4 hours over the course of 48 hours. The fun starts tonight at 11 pm when Nicole joins retired Navy SEAL and endurance athlete David Goggins in competing in his virtual 4x4x48 Challenge.

In typical Nicole fashion, she’ll be running with a rucksack, putting one foot in front of the other, all to raise money for our work. “Heroes saved my brother’s life,” Nicole said, referencing Adam’s service dog, Tracy, that Heroes gave him in 2012.

Not long after, Nicole started volunteering for Heroes In Transition (HIT), a role that would expand to becoming our Director of Development and eventually our Executive Director in 2016. “I look at what they did for Adam and I knew I would do anything I could to carry on Eric Jones’ mission of helping others who serve our country,” Nicole said of her commitment to HIT.

That commitment will be on full display this weekend when she’ll be running in and around her home in Mashpee.

When her mind begins to wander, it will undoubtedly go to people like her brother Adam, our co-founder Cyndy Jones, and to those who serve and have served in the military. “I really think of all the men and women of the armed forces and what they and their families endure,” Nicole said. “At the end of the night, I get to sleep in my own bed. So many of our men and women who serve our country don’t have that luxury.

“I do it for them and I think that will always be a part of my enjoyment of running,” Nicole continued. “It comes from being able to think about others and how I can give back to them.”