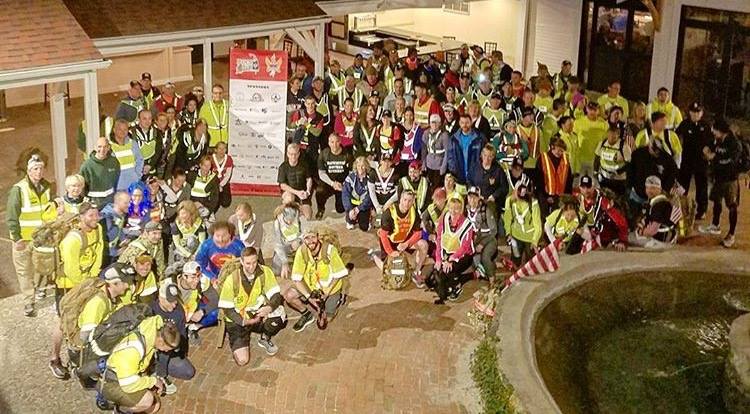 In the first chilly moments of May 5, just after midnight as 108 runners and drivers finished last-minute preparations before leaving on their 220-mile relay across all 15 towns on Cape Cod, co-director Nicole Spencer described to several participants in Ruck4HIT what they were about to face: “It’s terrible, wonderful, awful, amazing, and you’ll do it again next year.”

More than 38 hours later, at the post-race celebration, co-director Steve Spencer asked the tired ruckers: “Despite this being one of the hardest things you’ve ever done, how many of you would do it again?”

Hands shot up, cheers rang out, and tears filled eyes.

As Alec Reisberg of Long Beach, CA, said just after his Team Match Grade was the first to cross the finish line: “This was a life-changing experience.”

Life-changing for the participants, and life-changing for the beneficiaries, as well: As a fund-raiser for Heroes In Transition (HIT), Ruck4HIT’s 12 teams—with each runner carrying a 20-30 pound rucksack to represent the burdens of veterans and active-duty military—helped raise over $140,000 for the non-profit organization’s veterans-support programs. Cyndy Jones, co-founder of HIT, thanked everyone involved with a simple but heartfelt, “We are so grateful.”

Even before the event got under way, the seven runners and two drivers on each team all knew the weather forecast: Heavy rain and winds were on the way. After giddily posing for team photos, headlamps strapped on and camera flashes bouncing off their reflective vests, and before silently pausing to hear runner USCG Chief Kirsten Atteberry of Mashpee (captain of Team Atteberry) sing “The Star Spangled Banner,” they got a pep talk from the organizers.

“Take a minute to remember why we’re here,” Nicole Spencer said. “It’s more than us. It’s more than being up [for two nights straight]. It’s more than the rain. So every time you’re tired, or you’re cold, remember that somebody else isn’t here. That’s what’s going to get us through the hardest part of the next two days.”

At 12:28 a.m., the runners and drivers shouted with excitement as they took off from the start line at the Courtyard Restaurant and Pub in Bourne, their headlamps—along with one whimsical reflective headdress—bobbing in the dark as they made their way to the 12 vans parked up the road at the first checkpoint. About 4:40 a.m., runners began arriving at the home of Cyndy and Ken Jones for the first food stop, featuring coffee, homemade scones, breakfast items from Marshland Restaurant and Bakery, and plenty of endorphins. Nine hours or so later, with the leading team in Truro on the 30th of 68 legs, the first raindrops fell. By the 31st leg, Team Match Grade’s Andy Madigan of Leesburg, VA, was running in a deluge.

As vans began to arrive for the first of three Team Challenges—climbing the Pilgrim Monument—amid wind-driven downpours, runners disembarked to wrestle ponchos over their heads knowing that they had likely run their last dry steps.

“If it wasn’t hard, everybody would do it,” said one of the Match Grade runners. Weather wasn’t the only challenge: A team member had already been lost to a knee injury, so the other runners were grinding out extra legs. A volunteer team of physical therapists, led by Alycia Markowski, was being kept busy at exchange zones along the route.

“Some people wouldn’t have made it without their help,” said Steve Spencer.

As whitecaps roiled Cape Cod Bay, the runners and drivers headed into the cold, windy and wet night, trying—and often failing—to dodge torrents sent up by passing cars that were better suited to surfing than running. Later, they would spend lonely, soaked stretches on the Cape Cod Rail Trail, brightened only by their headlamps and the occasional beacon of a volunteer giving encouragement.

With the dawn came the comfort that the hardest part was over and that lifetime bonds had been formed.

“It was amazing,” said Wendy Mitchell, a driver for Team Mitchell. “The love and caring we all had for each other; one or two would falter but the other five would be, ‘We can do this!’”

Although Team Match Grade at one point led by about two hours, losing first one runner and then another to injury slowed their progress. After one last downpour, Team Match Grade crossed the finish line at Dino’s Pizza and Sports Bar in Mashpee at 12:51 p.m., just seven minutes shy of 36 hours after they started. A minute later, Team Spencer came across. By about 3 p.m., all the teams were in—and the skies began to clear.

Thara Babineau of Cotuit, running on Team Shamruck, was met by her gleeful 3-year-old son, who exclaimed, “You won!”

The same could have been said for everyone involved: Runners, drivers, volunteers, sponsors and all the rest of the event’s many supporters. In the afterglow, even the horrendous weather was shrugged off.

“The only bad part about the weather was going from your nice warm van to do the exchange, because you’re standing out there just getting nailed,” said Reisberg, whose Match Grade Apparel’s role as a Heroes In Transition charity partner led to fielding a team. “But once you got going, once you accept the fact that you’re going to be wet, it’s easy. You put your head down, put one foot in front of the other, and just go.”

Making it easier for Team Match Grade were their angel partners: Reisberg, who served in the Marines for seven years, had patches made for each team member that represented a Marine who fell in Iraq or Afghanistan, along with bios of each. “So when it does get tough and it does get hard, you know you’ve got a hand on your back,” he explained.

Added teammate Thomas Benedict, from San Francisco, CA: “This is an experience we’ll carry with us. Now, hopefully, we can impact other people’s lives because of having done this.”