Sue and Donald Douglas Receive Support When They Needed it Most 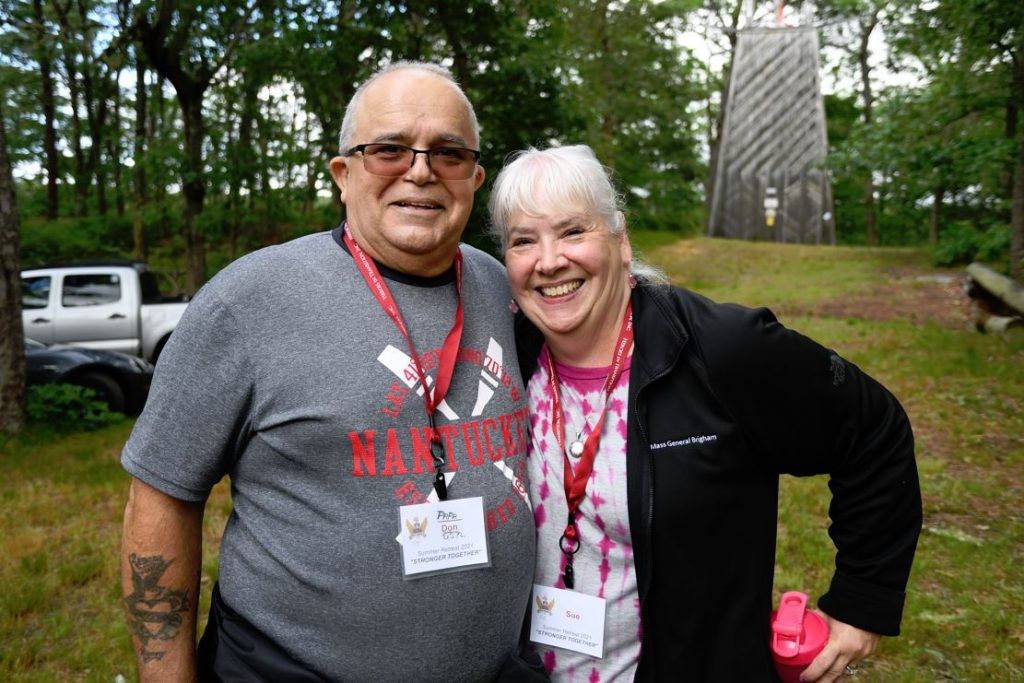 When Donald Douglas of Mashpee started participating in Heroes In Transition events three years ago, he was hoping to give back by supporting local veterans returning from war. “For us, we have gotten so much more out of it,” his wife Sue Douglas said. “People come into your life for a reason just like Heroes did. I truly believe that.”

“They have helped me a lot,” added Donald, who is affectionately known as “Papa Don.”

It was around that time that he was diagnosed with multiple myeloma. “You hear the word cancer, you know it is a death sentence,” he said. “You don’t know how long you got.”

Shortly after their life turned upside down, Donald and Sue attended their first Couples Retreat at the Ocean Edge Resort in Brewster. Married for 38 years, the two are best friends, supporting one another through life’s toughest moments.

“She is amazing,” Donald said. “She keeps me going. Without her, I don’t think I could do everything I’m doing now.”

Our Couples Retreats – the pair have been to two more since 2018 – have helped to strengthen their relationship. “I like coming to these because I learn things and it brings us closer together,” Donald said in June at the most recent one they attended at the Cape Codder Resort in Hyannis.

The Douglas’ involvement in Heroes In Transition has given them something far greater that they ever expected – the family they have formed with other local veterans.


“Before I met them, I didn’t have anyone to talk to who was a veteran,” Donald admitted. “I came to the first one and I met Jay [Soares] and the rest of the guys. We all opened up to each other. …We clicked. It felt good to have a family that served in the service. We know what each other went through and we get along like brothers and sisters.”

“They get it,” Sue said. “They are younger than us, but they still get it.”

When Donald needed help putting up his gazebo, those veterans – his adopted family – put it up for him the last two summers. It was a small gesture that meant the world to someone who had endured chemotherapy, radiation, and a stem cell transplant to treat a disease he has attributed to his service in the Navy and the Vietnam War.

Last year, after Covid hit, those same veterans reached out to check on Donald and Sue. They offered him rides to the doctor. And they set up Zoom calls to ensure that Sue, Donald, and the members of the Heroes In Transition tribe would be there for one another over the pain, isolation, and uncertainty of the past year.

“It really helped to have another connection” during the pandemic, said Sue. “For me, I was working remotely and the only people I was talking to were people from work. …Even with the spouses, we’ve created such bonds with each other. We might not be at an event, but if there’s something going on, we’ll message each other just to check in.”

For Donald, it’s the type of support he desperately needed when he returned home from the Vietnam War, both of his legs in a cast after breaking his feet, but never received. Instead, he was insulted and had objects thrown at him. “When Don originally joined Heroes, he didn’t want to see that happen to another veteran who came home after serving their country,” Sue said.

Through Heroes In Transition, Donald and Sue have found exactly what they needed and deserved: a safe, non-judgmental place where they can confide in other veterans, military couples, spouses, and families and support one another through the difficulties that come with military service.

“I don’t think a lot of people understand, when a man or woman signs that document when they join the military, what it really means,” Sue said. “There is a lot of baggage they come home with. Unless you live it and see it, no one ever understands it.”

It’s a sacrifice that Heroes In Transition has long understood. And it’s why we work so hard to build a close-knit community to help service members, veterans, and their loved ones work through those difficulties, even when it’s something as scary as cancer.

“When I first was diagnosed, I wanted to give up,” Donald told the 13 other military couples attending our retreat in June. “But you guys kept me going. …Coming here has helped me a lot. We’re all a family – the new ones and the old ones. Everyone here is family.”