The Difference a Dog Makes 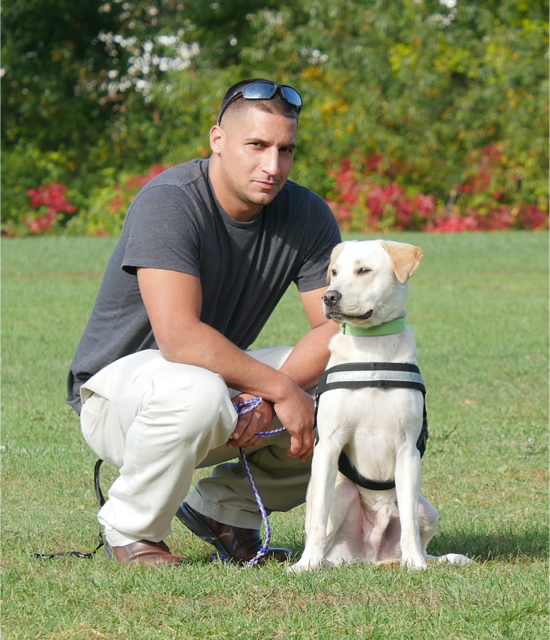 After work one day recently, Anthony Encarnacion played with his dog on the beach, idly tossing the yellow Lab a tennis ball in the late afternoon sun.

An ordinary scene, except that it wasn’t: Encarnacion is a veteran of the war in Iraq dealing with PTSD, and Aces is his assistance dog.

“That whole thing where you have that time of letting your mind run, thoughts … he replaces that,” said the 30-year-old from Pocasset. “It’s unconditional.”

On Saturday, October 22, at the 7th Annual Fall Gala of Heroes In Transition at the Coonamessett Inn in Falmouth, Encarnacion and several other veterans will be able to meet the donors whose support helped provide their dogs. There, a second name will be bestowed on Aces: “Billy,” in honor of donor William Zammer, owner of the Coonamessett.

Heroes In Transition (HIT) provides specialized assistance to military families and veterans who are in need of help such as home modifications, transitional support group therapy and financial support, as well as assistance dogs. It was founded by Cyndy and Ken Jones of Mashpee in memory of their son, Capt. Eric A. Jones, USMC, who flew UH-1N (Huey) helicopters and was killed while supporting a combat mission in Afghanistan on October 26, 2009.

“Eric loved dogs, and he was going to get one when he came home from Afghanistan,” said his mother. “Knowing that, we researched PTSD dogs, and that really opened the door to helping veterans in a way that would have been so meaningful for him.”

According to the U.S. Department of Veterans Affairs, between 10 and 20 percent of veterans who served in Operation Iraqi Freedom and Operation Enduring Freedom in Afghanistan suffer from Post- Traumatic Stress Disorder.  Encarnacion said that all 16 members of his platoon returned safely from Iraq but that he believes only seven are still alive, the others victims of suicide, drugs, or alcohol.

To date, HIT has provided 44 dogs, more than half of them to veterans on Cape Cod.

Encarnacion grew up in Sandwich before spending four years in the Army, serving in Iraq with the 2nd Battalion, 34th Armor Regiment attached to the 1st Infantry Division. The latter is known as the “Fighting Aces” and although the lab was off-duty on this beach outing, Aces is all business when he’s wearing his service vest.

People with PTSD can have trouble with everyday tasks, holding down jobs, and staying in relationships. Under the tutelage of master dog trainer Matt Noone of HyNoone K9, Aces is being trained to recognize when Encarnacion is feeling stressed in public situations and then help calm him, perhaps by putting himself between Encarnacion and someone too close behind him in line at a store, or gently crawling into his lap at the doctor’s office. Working with Noone, man and dog will discover which soothing gestures work most effectively. So far, Noone has trained 24 dogs since he began working with HIT two years ago.

Encarnacion received Aces about three months ago, and says the dog’s mere presence has already been helpful.

“He’s my little buddy,” said the veteran. “You don’t have to worry that there’s a catch, and that’s a common thing with veterans. We don’t trust everything.”

While he was still in the service, Encarnacion lost his mother to cancer. Upon returning, he struggled to keep a job, fell into drug use, and eventually wound up sleeping in his car. He’s been drug-free now for 2 ½ years, works as a landscaper, helps care for his daughters (ages 8 and 2), and is studying engineering at Cape Cod Community College.

Coincidentally, he was recently the second recipient of the Eric A. Jones Memorial Scholarship through the Cape and Islands Veterans Outreach Center.

Sitting at a picnic table, with Aces curled up at his feet, Encarnacion talked about how he has gotten to this point. While in the military, he explained, “you feel you have a purpose, like you mean something, and that’s just taken away from you” when you get out. After being surrounded by people who were on your side fighting battles with you, “you come home and you’re fighting battles by yourself. To have something and then not have it, it gets you.”

“I always thought it was just me, making bad choices,” he said. “It took other people who are going through the same thing to realize that maybe there is more going on. And once you stop the drugs, you have more mindfulness about what really is affecting you.”

Thanks to a 6 a.m. wake-up call from a hungry Aces—who will pull the sheets down if necessary—Encarnacion no longer hits the snooze button on his alarm, so he’s no longer late for work. A night out doesn’t turn into more than that, because he knows he has to get home to care for the dog. A recent rough patch that has included the death of an uncle could have sent him into a downward spiral, but he is coping while still keeping up with work, classes, and his family responsibilities.