The Ruck4HIT Proposal, One Year Later 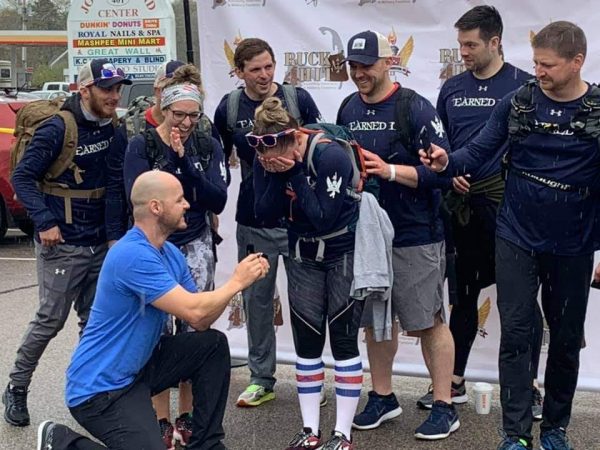 Only one word could best describe the weather of the 2017 Ruck4HIT – miserable. With high winds and torrential rain over the two-day race, the event was not kind to participants.

But when it was over Josh Avery, Blithen Davis, and Ryan Stoddard – the trio volunteered as physical therapists, supporting runners that year – could not stop talking about it with their coworkers at Emerson Hospital. “They said it was the best weekend they ever had,” said Colleen Dowling. “Even though it was raining and the weather was horrible, they talked about the energy of the entire weekend, the charity aspect, and that there was a real camaraderie among the teams.”

The next year, Colleen joined her three former colleagues on Ruck-Habilitation, one of 10 teams to compete in the 2018 race. “After that weekend, I told myself I am going to do this every single year,” Colleen said. “The overall message of the event is we’re doing something good for so many people who have done the same for us.

“We don’t see and hear everything the military has done for us and we don’t go through everything they go through, but it is a great weekend to do something to show them we are by their side,” she continued.

And so Colleen, who grew up in Lowell and now lives in San Diego, California, flew back East to Cape Cod for last year’s Ruck4HIT.  It was part of a three-week trip that included attending her cousin’s wedding. It also meant she would be away from her boyfriend, Jay Jaime, for a significant period of time.

Little did she know that Jay would be flying out the morning of Saturday, May 4 to surprise Colleen at the finish line. As Ruck-Habilitation posed for a team photo, Colleen recalled, that her teammates “kept trying to shuffle me into a certain position… Then we ended up taking our picture and I remember it felt like slow motion. I saw something out of the corner of my eye. I saw a shirt color and said to myself, ‘Oh, Jay has shirts that color.’ I see his head and think, ‘That kind of looks like Jay’s head… Oh my gosh, that is Jay!” 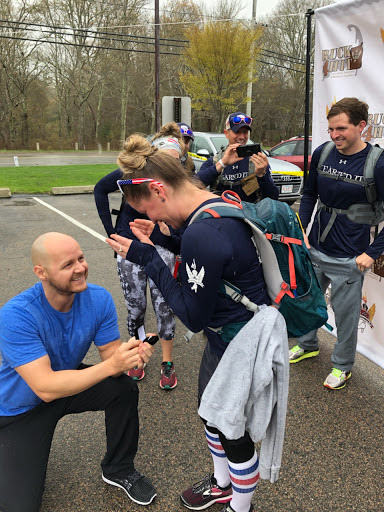 Perched on one knee, Jay popped the question, asking Colleen to marry him. “It was honestly one of the best moments of my life,” Colleen said. “To be able to finish a race like that and have that happen was one of the most incredible things.”

For more than 36 hours, her teammates, which included her brother Bob, were in on the secret, but never let on about the surprise Ruck4HIT proposal.

On April 12 of this year, Colleen and Jay were planning to get married in Las Vegas, the place they first met three years ago– she was at a bachelorette party and he was at a friend’s birthday celebration. Then they were planning a two-week honeymoon to Aruba. Of course, it all got upended by the pandemic.

Instead, the pair dressed up on the day they were supposed to be walking down the aisle – Jay in a nicely tailored gray suit and Colleen in a white dress – and had an intimate dinner in their San Diego apartment before opening up a bottle of champagne and Zooming with their parents and their bridal party.

“We tried to make the best of it,” Colleen said.

The pair will tie the knot officially in April of next year. A few weeks later, Colleen plans on running her third Ruck4HIT. This time when she finishes, she will be expecting her soon-to-be-husband waiting for her at the finish line.

“The more years I do it, the more meaning it has for me,” Colleen said of the race. “Last year, I remember running through construction zones in Provincetown and being in the rain and at the same time feeling miserable. It just sort of solidifies how much the race means to people that they are willing to go through every part of it and know it will not be entirely pleasant. We are working for something that is much bigger than each one of us and that really sits with you.” 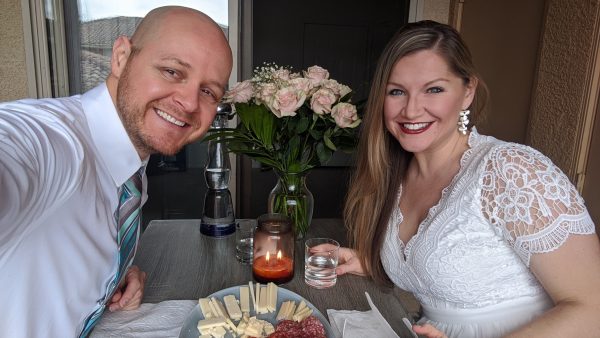